We've officially thrown down the gauntlet to our class racing wagons of steel brothers from the American contingent. A stock vs altered; '64 Dodge vs '64 Plymouth; wagon on wagon showdown. weights are similar for the two cars, as is power but their behemoth is set on kill when it comes to chassis tuning for the highly competitive stock class racing that they sometimes enjoy, whereas our jalopy is set up like a hot rod shopping cart. The '64 Savoy, aptly named Britney Spears (so named during their drinking days) had better be wearing her big girl shorts cuz El Chupacabra is coming for her. This will be the first time these two heavy hitters line up against each other and the stakes couldn't be higher. No seriously, the loser buys steaks and probably near beer if memory serves. This race goes down July 11-13 at Pacific raceway for their Wild West Nostalgia weekend. The match bash will probably take place on the Friday for the test and tune evening so we can be sure that they won't try to sneak into a different lane to avoid a heads up race!!!


Mr. Carlson and I made the long journey to Ashcroft B.C. last weekend for the Langley Loafer's Old Time Drags. Weather was perfect all weekend although the air was a bit dense and it's surprising to see clouds in this video since it was almost always blue skies and scorching sun with a reasonably consistent tail wind.
We did a few upgrades over the winter that really tightened up our program; first and foremost we ditched the sleepy 4.11 gears for some aggressive 4.89s. We also sent out our valve body to Turbo Action to have it converted into a full manual reverse pattern which meant that I also had to switch the buttons around on our push button shift panel. Not an easy task but it looks and performs pro. Another upgrade we did, which may sound trivial, is to replace the chrome, period correct looking tach with a monster tach and functioning shift light. It looks wrong in a car like ours but we want to win some races. 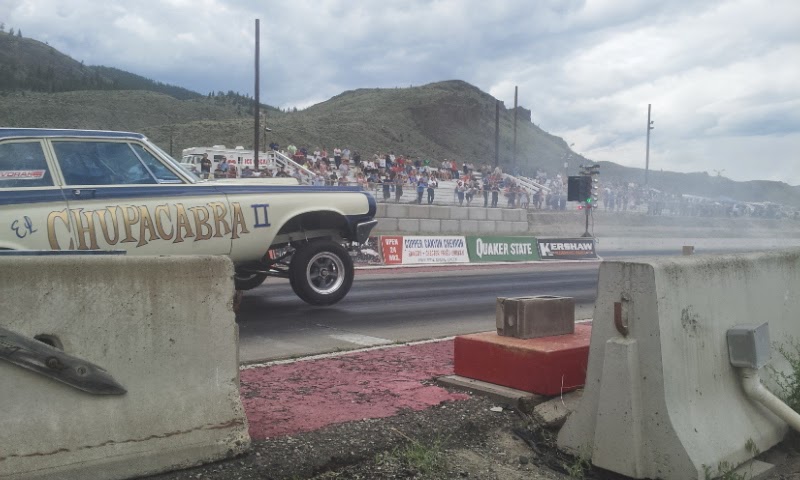 Old Chubby Cobra was working like a thoroughbred stallion this weekend, pulling a foot of air under the front tires (not quite yet in this shot) with 1.55 60' times. and averaging 11.13-11.17 E.T.s. Of course when it came down to eliminations on Sunday we were pitted against a fellow in our class with a '55 Chevy straight axle car that ran a 10.50 on a 10.50 dial in with an .020 reaction time. I may as well have stayed at home with a run like that. We ran an 11.16 on an 11.15 dial and I cut my best light of the weekend with an .027. A great run by most standards but that, my friends, is drag racing. We packed up the camp in record time, cracked a beer (and a near beer), said our goodbyes to our racing family and Chris put the hammer down on the Duramax as we headed for home. It's funny that I still classify this as a phenomenal weekend, even going out in the first round but going racing is sometimes more than racing. We see friends that we haven't seen in a long time, we went fishing on the way and I brought two of my Swing Bikes which offered a 100% chance of hilarity with a side of road rash. Did I mention that I love my life? 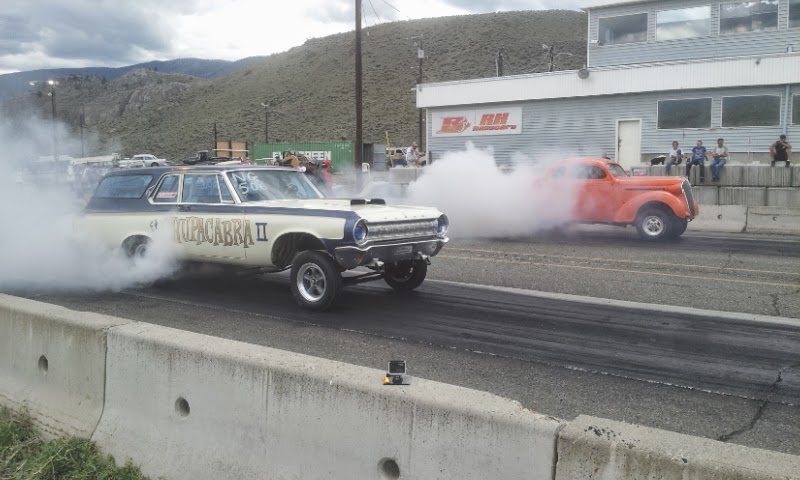 Posted by Polara Pat at 9:03 AM No comments: