I was feeling a bit nostalgic this morning so I decided to flip through some old pics. Can you believe El Chupacabra came from this beast? Not only that but I still had a carport before it was overtaken by snow load which ultimately lead to the fantastic garage that I have now. Thanks nature.

Uh Oh!!!The consequence of this post crushing the roof of our car was also a blessing since it was rotted beyond repair from years of mouse piss deteriorating  all of the vertical supports. Everything happens for a reason.

The Monkees wish that they had a '64 Dodge altered wheelbase convertible wagon.

Couple of dorks having a dork off with their new hoopty

Then the standard issue "getting the bugs out" scenario which involves melting down a couple of tired big blocks before we sell our first born to buy....

Now you should be all caught up and ready for another stellar year of racing in 2014.
The track schedules don't generally come out until the new year but you will be the first to know when they do.

This was our last outing of the season and it was a bit of an ugly day. The forecast called for 5mm of rain and we foolishly still drove all the way to Osoyoos to get our final fix of adrenaline therapy. Fortunately the rain staved off for us and we settled for a strong headwind and (as usual) no traction. The good news is that nobody had traction so it was a level playing field. The starting line game became a fickle a balance of soft throttle tip in coupled with a slow brake release and some aged Gouda. Mmmm Gouda. Once we felt reasonably confident that we could work with these conditions we easily made it through the first round but by round two I actually hooked and despite a huge lift scrubbing 10mph from our speed we still broke out with a 7.20 on a 7.27 dial in. That's racing folks.

So in the off season there will be a lot of this happening. I'll do my best to give updates on maintenance and upgrades but I encourage you to keep your expectations low to avoid disappointment.

See you in the funnies 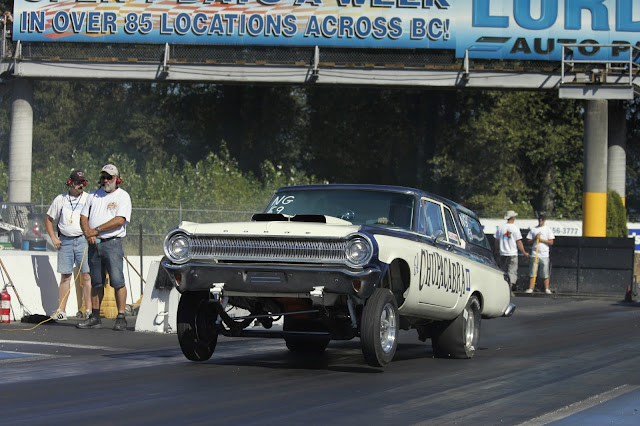 These glossy shots were sent to me from our buddy Melinda from Galore Racing. 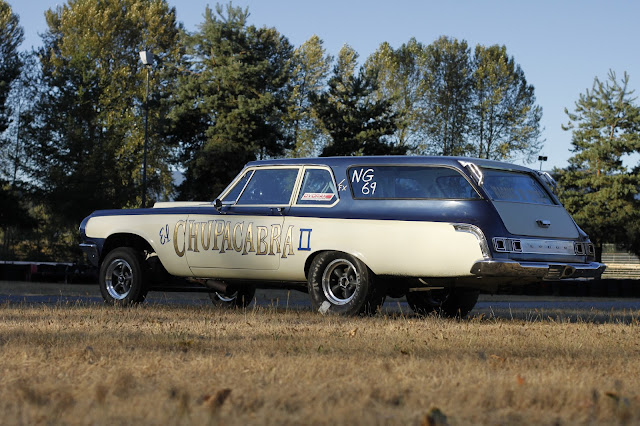 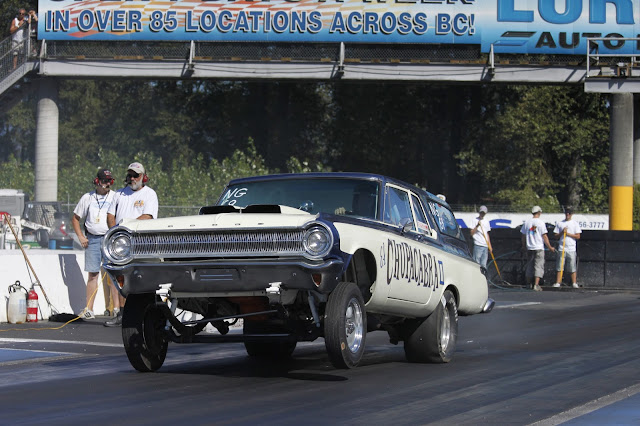 Well I'm officially still exhausted from our raucous weekend in Misssion B.C. for the  Langley Loafer's Old Time Drags this past weekend. This is our big outing of the year and as usual it did not disappoint in the least. The weather was perfect and the car behaved itself, clicking off consistent 11.1 passes @ 119 mph. The new motor is nothing short of mechanical art and people flock around the car in pits like flys to honey, making it a full time job explaining what the hell is happening in the land of altered wheelbase wagons. It's also fun to kick back and watch people walking by the car as they take time to try and pronounce "Chupacabra" before giving up and continuing on.
We still have a bit of work to do in terms of chassis tuning, gear selection and some transmission tinkering but the program has a clear and decisive path that can only lead to faster e.t.s and bigger wheelstands. We had a tight crew throughout the weekend that consisted of the entire Babe's Automotive staff, so confidence was high when minor malfunctions arose (as they always do).
Here you can watch a couple of great passes between me and our pal Steve Chase in his awesome '64 Merc pick-up. Steve is responsible for creating a straight axle specific class for us and we're forever grateful to him for lumping our wierd-ass race cars together with like minded people. I'll post more pics as they roll in but until then enjoy these videos shot by our own "Dangerous" Chris Carlson and be sure to crank the volume for maximum smile factor.

Posted by Polara Pat at 9:56 PM No comments:

When we realized that our 29/10.5Ws mounted to the kidney bean wheels we had hoped to use were experiencing serious interference in the rear wheel openings and our old steel Cragars up front were noticeably out of round and uber heavy, we decided that some classic looking American Racing Torque Thrust "Ds" were just the solution.

Damn if we didn't nail that one.

Posted by Polara Pat at 1:09 PM No comments:

Rising from the ashes of a devastating shop fire comes the illustrious new race motor for El Chupacabra II. So you take one semi-retired 1964 413 stocker race block with every go fast trick known to man inside, then bore it .140 over and order up some one-off pistons to achieve 13:1 compression, then you may as well add a roller cam for good measure. Port some already heavily ported iron heads in order to match the intake orifices of a brand new cross ram from A&A transmissions. Hell, we may as well port that too in order to achieve larger that max wedge size ports. Top it all off with some custom built Edlebrock 750s and we have a serious combo. This is very much the Coles notes on what's been done to this motor but we need to keep some sectrests in the name of mystery

Here we have it with velocity stacks which will need some clearancing to work.

And K&Ns for the sake of longevity.
Posted by Polara Pat at 11:56 AM No comments: 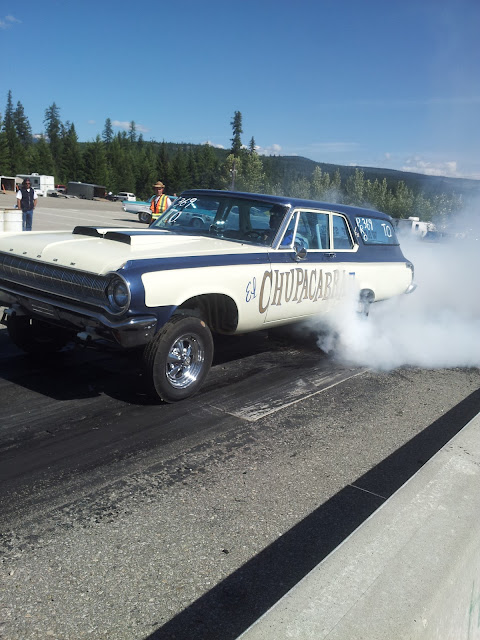 We made it back to Thunder Mtn last weekend after a one year hiatus and it was great to see all the familiar faces and be able to flog our new combo at a mere 4500 feet above sea level. We scored some new Hoosier slicks but unfortunately ran out of time before heading out, so we were forced to run our old cheaters that gave us so much trouble last year. So it wasn't much of a surprise when they spun like crazy off the line all weekend long. We did manage to make some traction later in the afternoon when the track was well seasoned and followed by a massive "I have a tire sponsor" burnout. Best 60' was in the 1.63 range and our best e.t. was 7.42. We're in the process of ordering up some sweet Torque Thrust wheels to cover all four corners and we'll wrap the rears in 29x10.5W steam rollers. Say goodbye to traction issues. It was a good weekend over-all giving us an opportunity to really put some test passes down on the old Maxed wedge. This motor sounds and runs better than expected. Once the chassis is better dialed in this thing will be a serious contender.
Our next outing will be the long awaited Mission old time drags on July 27/28 and we're feeling like our shit is pretty tight. The goal is high tens with some wheels in the air action. Come out and see us in the pits, you might even get to meet my mom if you're lucky. She'll be the one trying to make you eat a sandwich and potato salad. 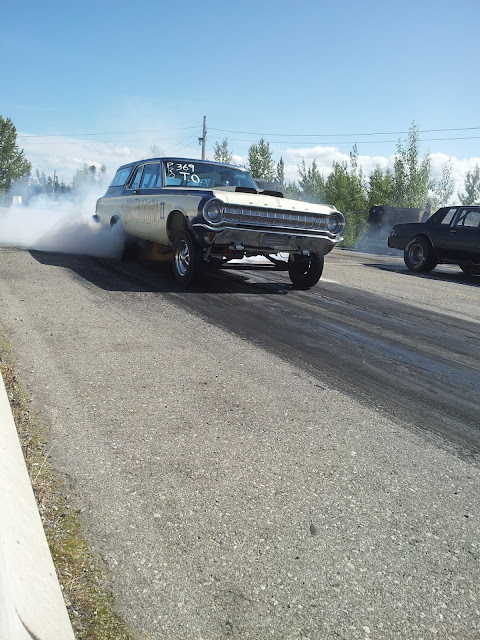 For those of you that have been religiously checking back to see if there was a fresh blog post since last Fall, I commend you on your diligence and patience. I'm terrible at keeping secrets at the best of times so this one was a killer. After the demise of our faithful old "Blue Bullet" race motor at last years season closer, Chris and I made a hard decision to bite the bullet and get our pal Dan Dvorak to build us something special. Dan is a legendary stock racer and engine builder who has been slinging his trade since our car was new. He resides in Waldo Florida so having a 700# crate shipped coast to coast seemed unreasonable to us...therefor we decided it was a good idea. As we began scheming with Dan about our hopes and expectations from this new mill it was clear that this project was going to quickly spiral out of control. Better the project than the car though. I made haste in acquiring a retired 413 block and heavily massaged heads from our pal and racing mentor Chris Barnes. Now that we had a starting point we needed to make some big decisions about induction, oiling, compression and the like. It was important to us to keep as much of a visually appearing 1964 race motor as possible. If our car was built in 1965, which is the era of our "Funny Wagon", it would most likely have a fuel injected Hemi for power. A private race team would probably be able to procure a cross-ram Max Wedge from the previous season for half of what it would cost to get into a Hemi. We went this route. Though our iron heads are not the original "hens teeth" Max Wedge" units, they are ported beyond belief and will (according to Dan) out flow the original MW heads. The Cross-ram that we decided to use is a beautiful reproduction built by A&A Transmissions and it has also been ported to match our tricked out iron heads. Since we're not running in a stock class we decided that it was o.k. to completely rollerise the motor and add every "go-fast" trick that those poor stocker's aren't allowed. It seemed like a good idea in the scheme of things. Dan took two brand new 750 cfm Edlebrocks and completely re-worked them for our application. There is way too much going on to list here but when the dust settled and Dan broke the motor in on his stand, running 15-20 gallons of fuel through the big lung to make sure that everything was well sealed and ran like a champ. It did. Dan was beside himself with the results. This from a guy who has been building race motors his entire life. He ran it for me on the phone and the sound was unbelievable. "It sounds like a funny car" Dan says. He of course is referring to a more modern top fuel type of car. The irony is that our machine is the original "funny car". Tonight we will install the motor and hopefully fire it up.